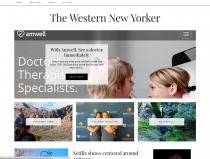 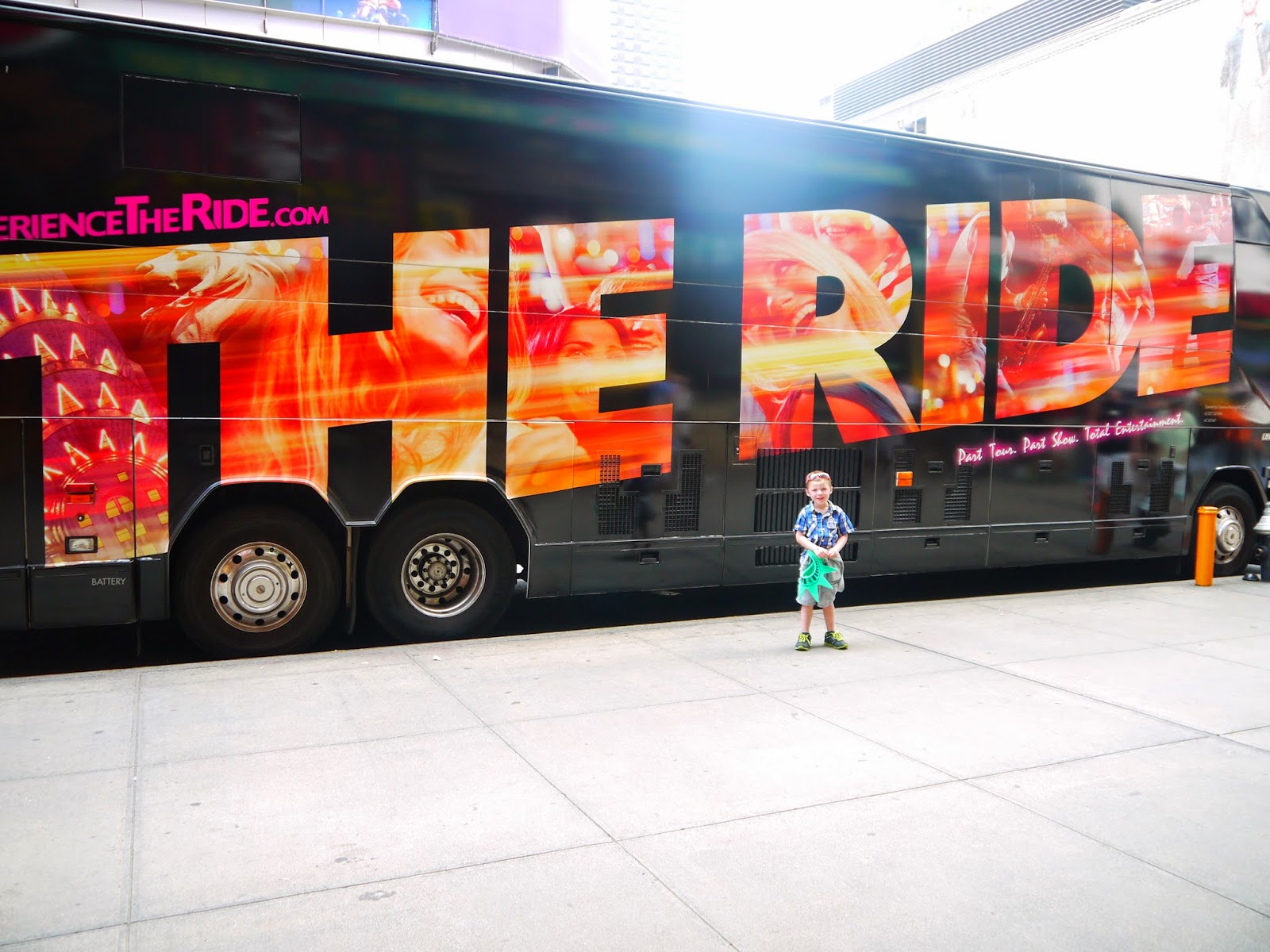 **We received free tickets to facilitate this review. I was not required to write a positive review nor was I compensated in any other way. The opinions I have expressed are my own. I am disclosing this in accordance with the FTC Regulations.
We were SUPER excited to try out the new tour bus circling Time Square, The Ride. If you have never been to NYC as soon as you walk out of the Port Authority building you are stopped by different tour bus companies trying to buy your time. They all have a special niche which many tourists are attracted too. Having never taken a tour bus, in NYC, I was delighted, The Ride, was half a theatrical show & half a tour bus. 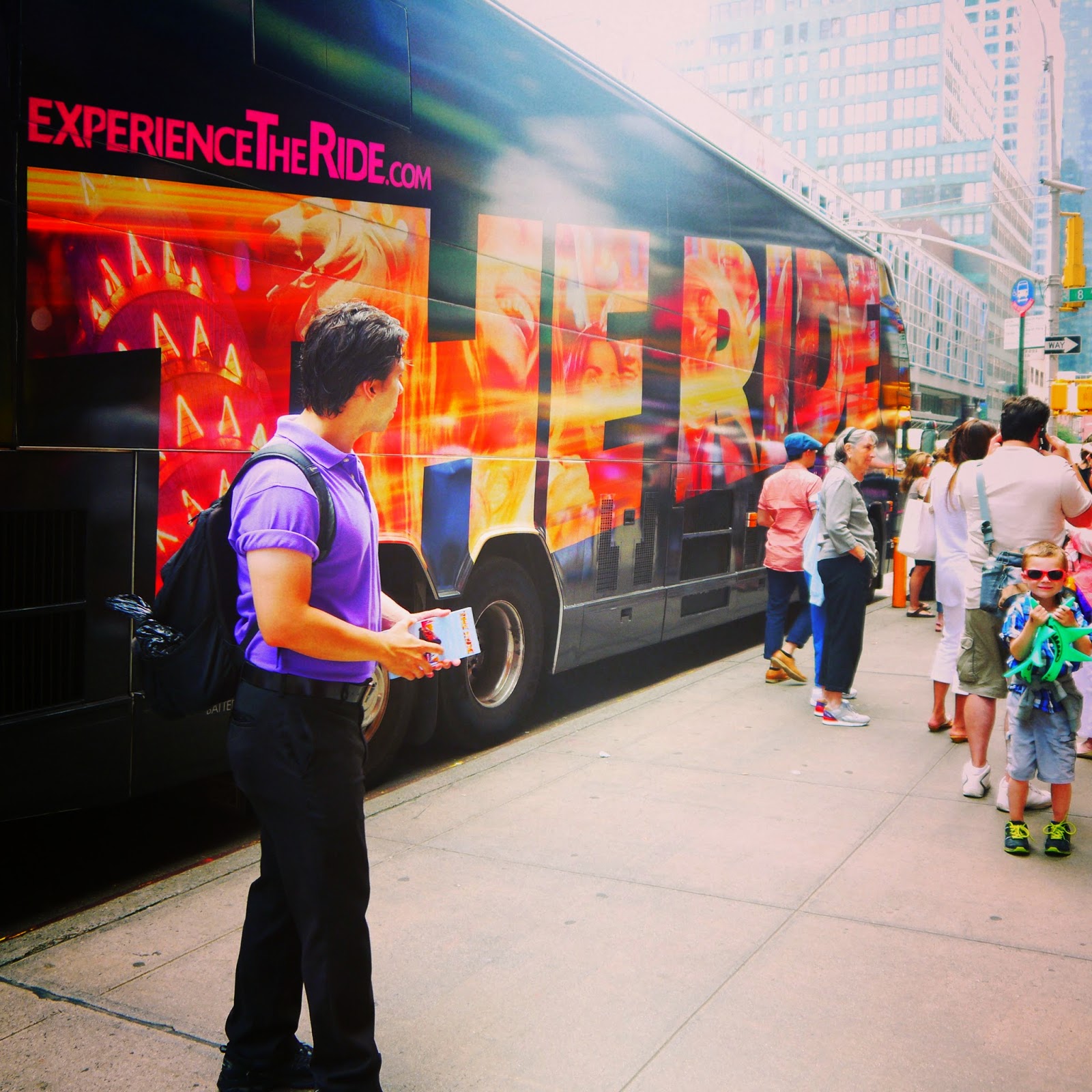 Did I mention this was a VERY popular experience? Loads of people wanted to join our 2pm tour!
Mclachlan was so excited once the bus pulled up. 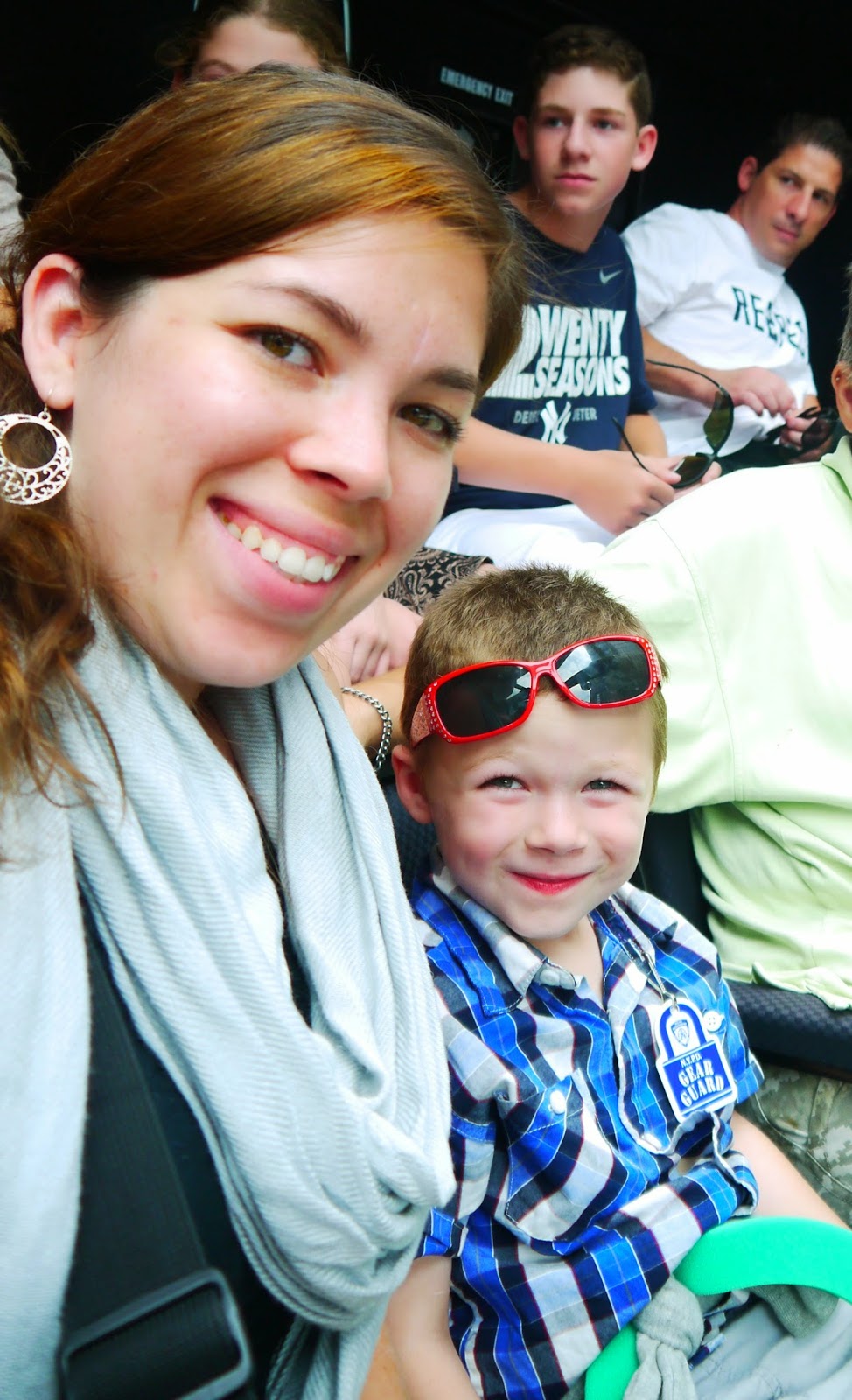 Once on board you are seated sideways verses the standard front-way bus. This allowed us to look out the bay windows at the streets of NYC. 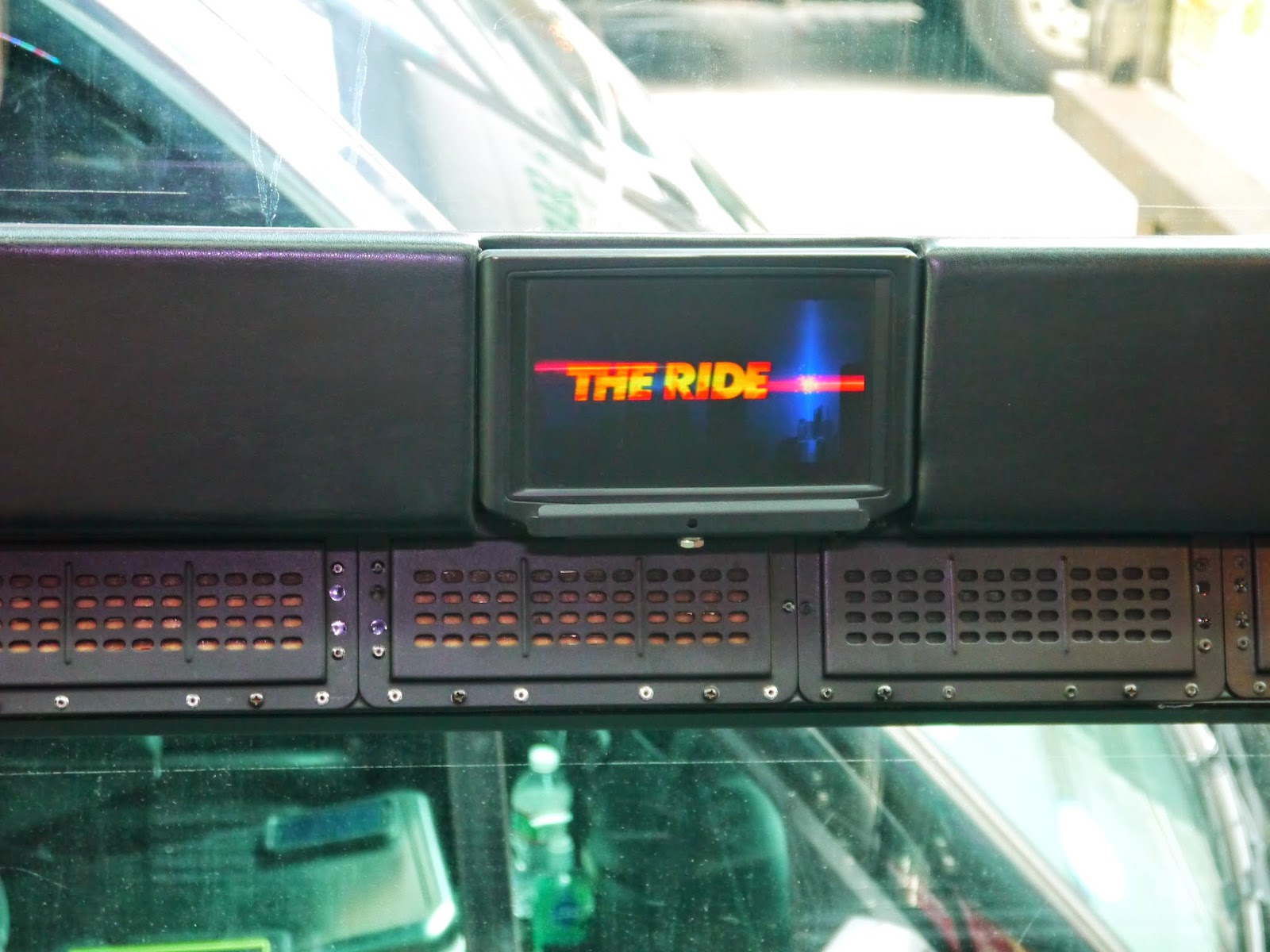 "THE RIDE is a multi-million dollar motor coach that comes equipped with state-of-the-art audio/visual technology, including 40 plasma screen TVs and over 3000 LED lights". The Bus, as you learn also can scan things around and give you interesting facts about them. 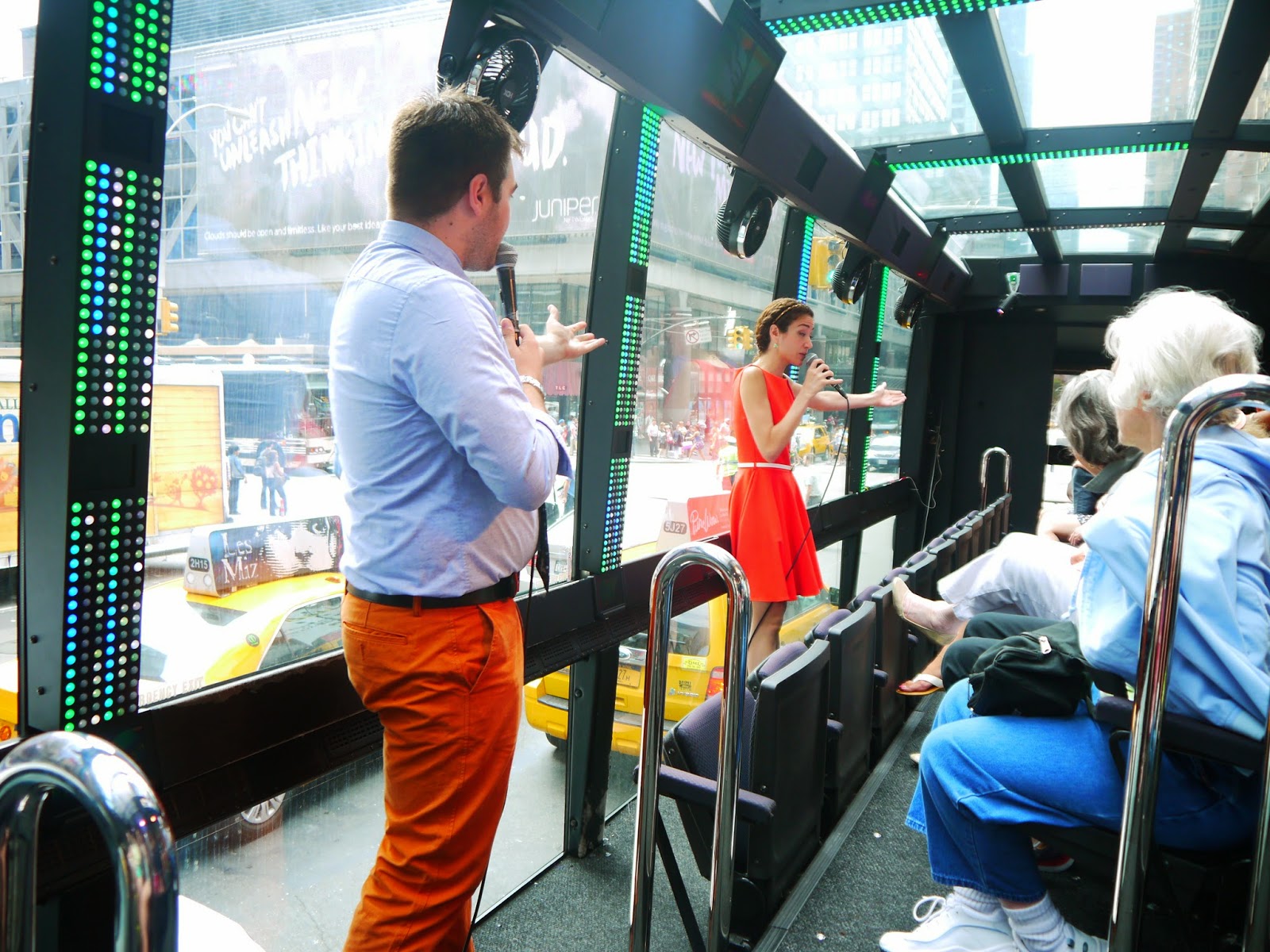 Then we were introduced to our tour guides/entertainers!
Might I add here they were dressed formal and suited this bus very well. 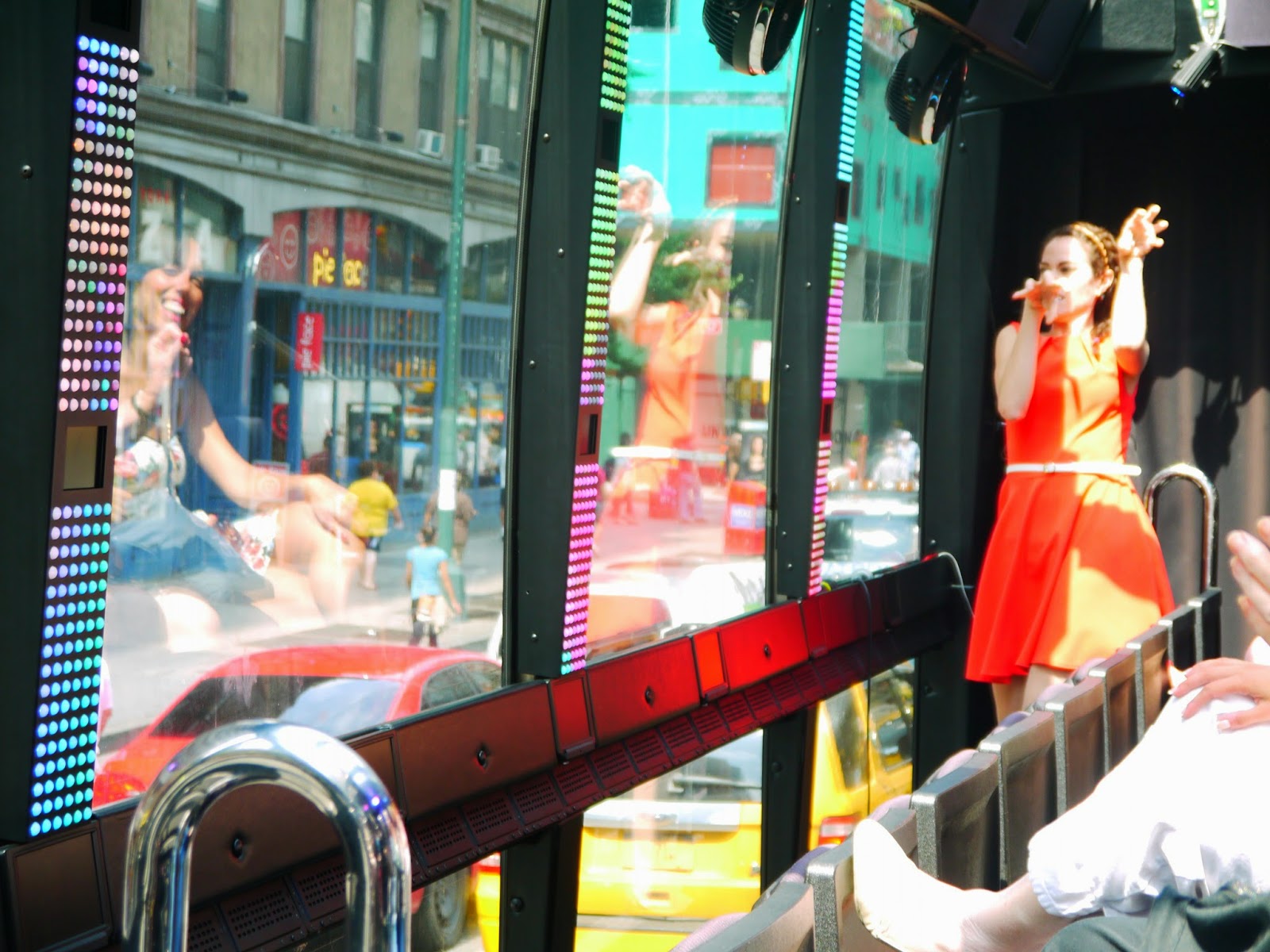 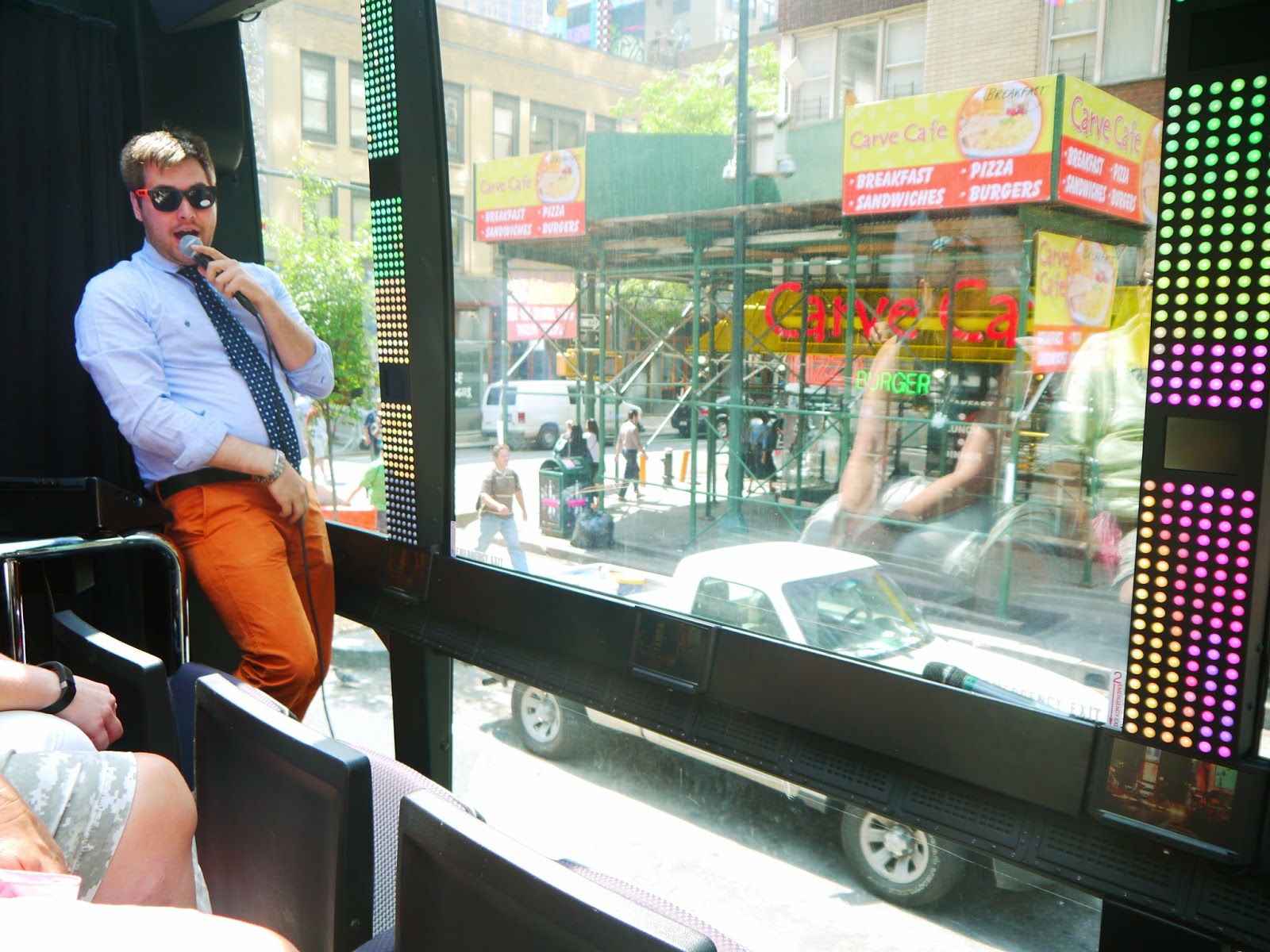 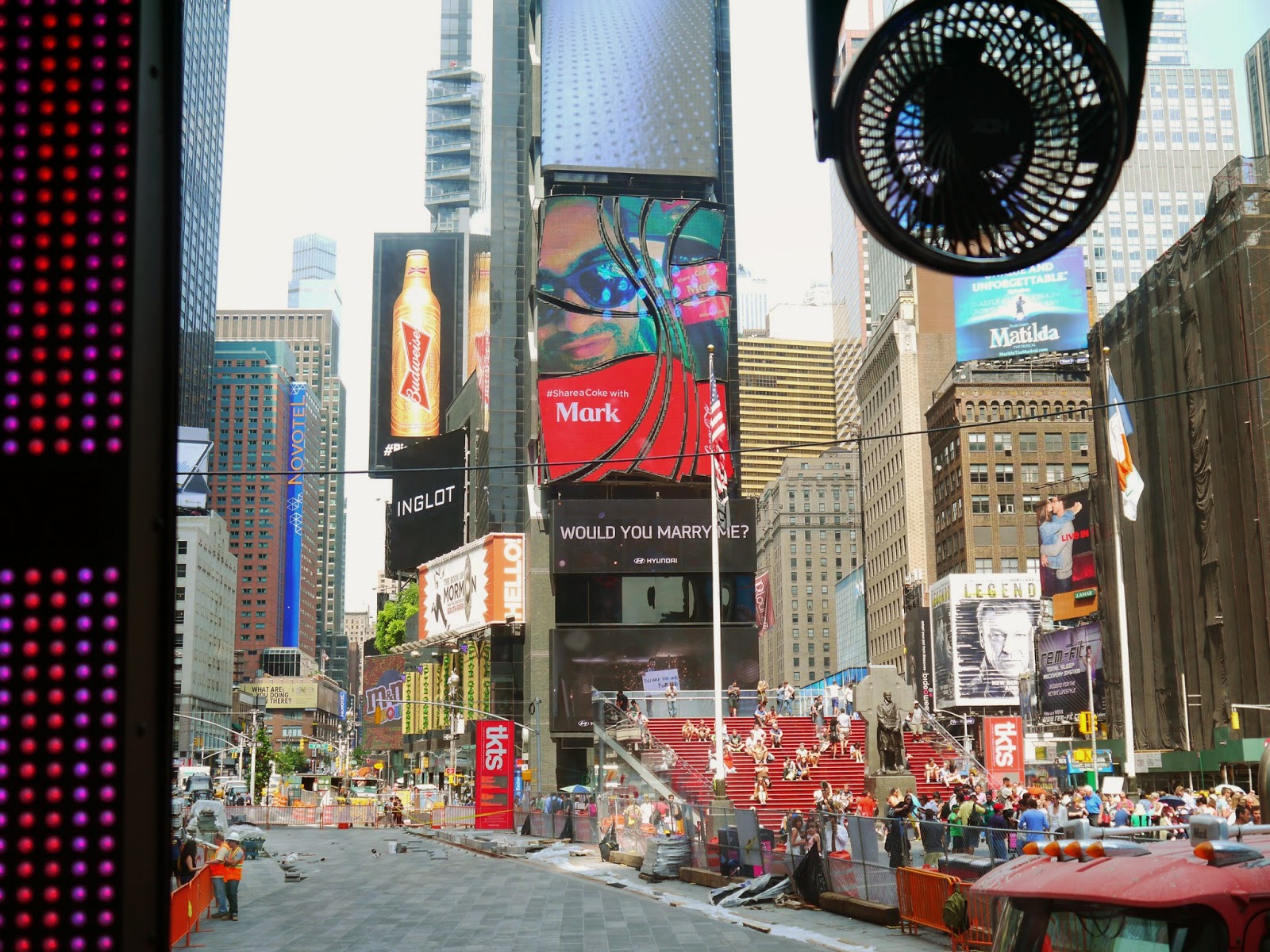 First stop was Times Square. There is a lot of construction going on but it didn't seem to matter because the buzz if NYC goes on with it. People gather to take in the views and arts of performers. 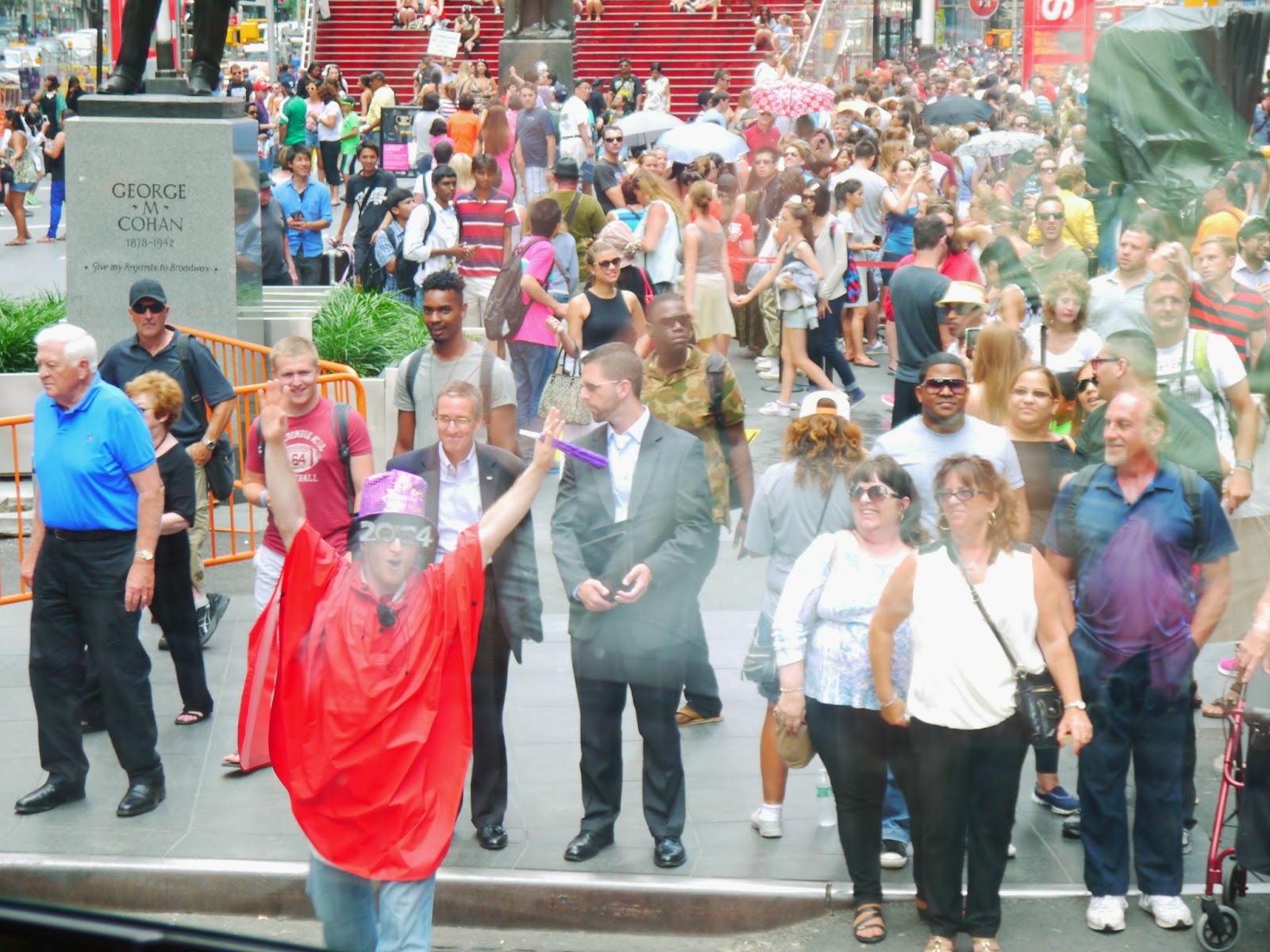 "On THE RIDE you watch the passersby look in pleasure at the theatrical indulgence of the performers on the sidewalk". This red "2014" New Years Eve dressed character was the first indulgence we experienced. He sang and cheered as we gave the crowd a fun "The Ride Cheer". 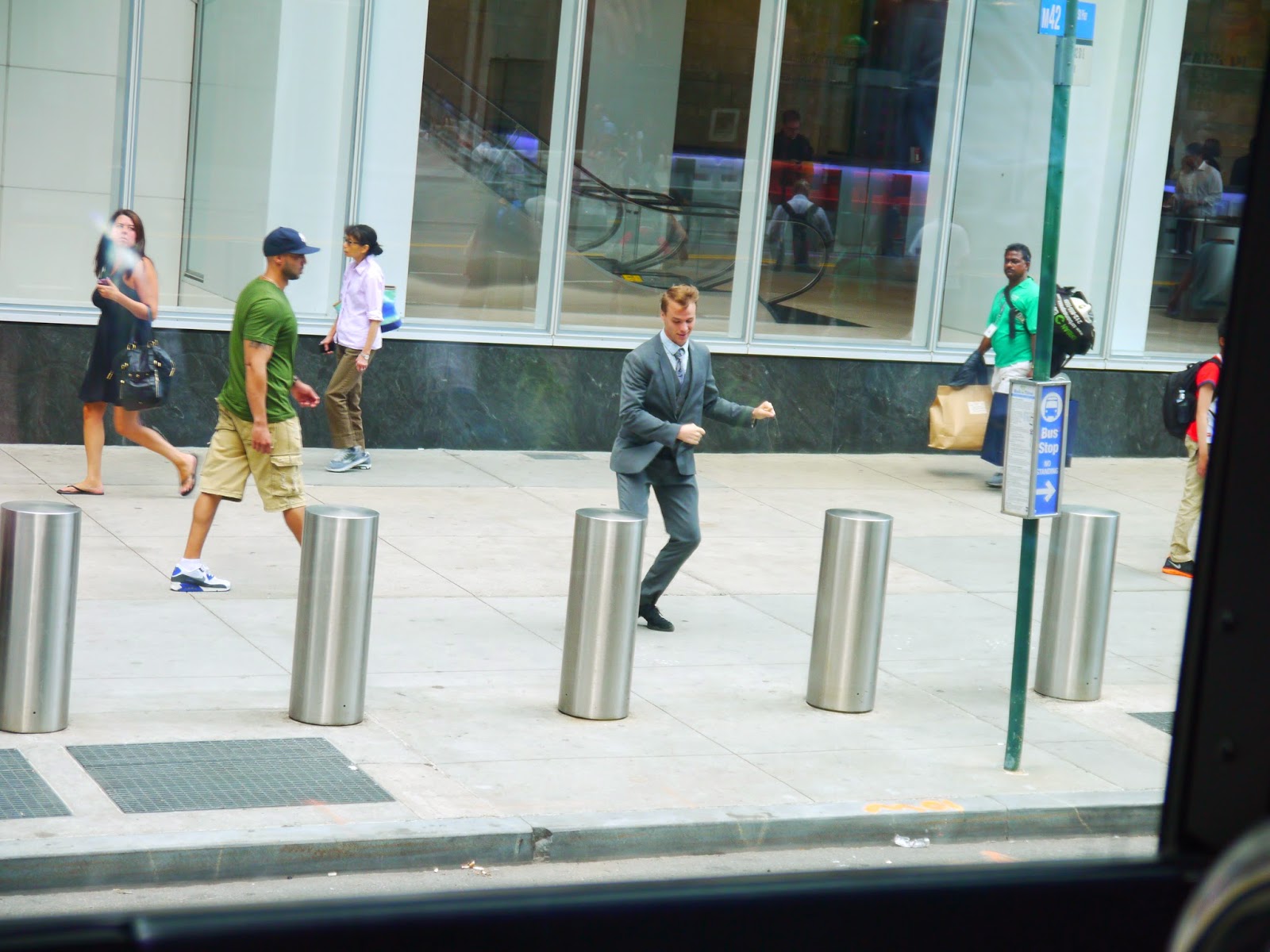 Then we were met further down by this gentlemen who in walking stride started ballet dancing. I could not really capture this in a photograph since it was so enticing to watch. What were the people on the street thinking? That is also one of the neat things because you sit facing the windows you can see their reactions!
This was amazing her voice was to die for!! 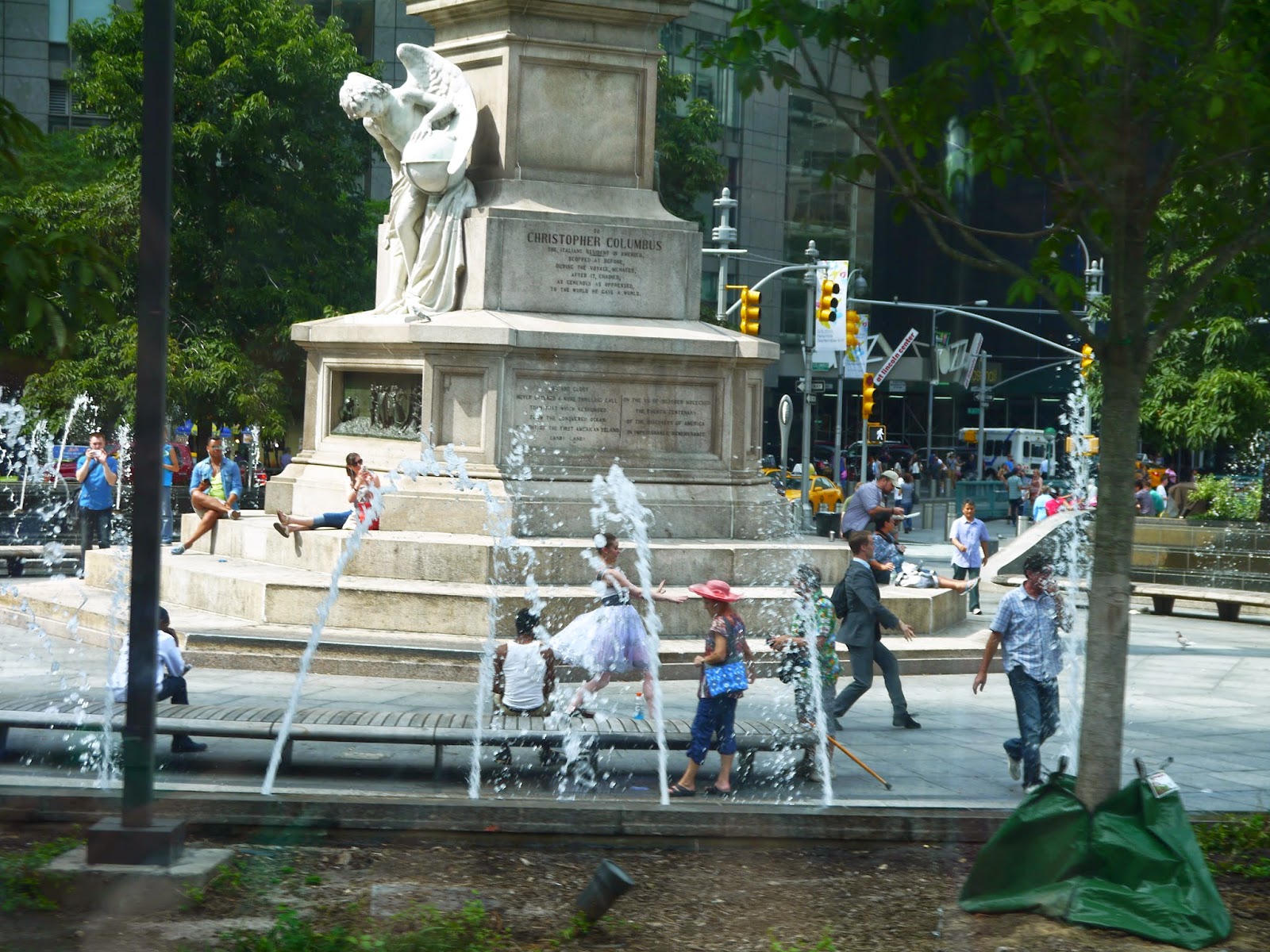 The final performance was two ballet dancers at Central Park fountain. This was amazing to watch them dance around other NYC pedestrians. 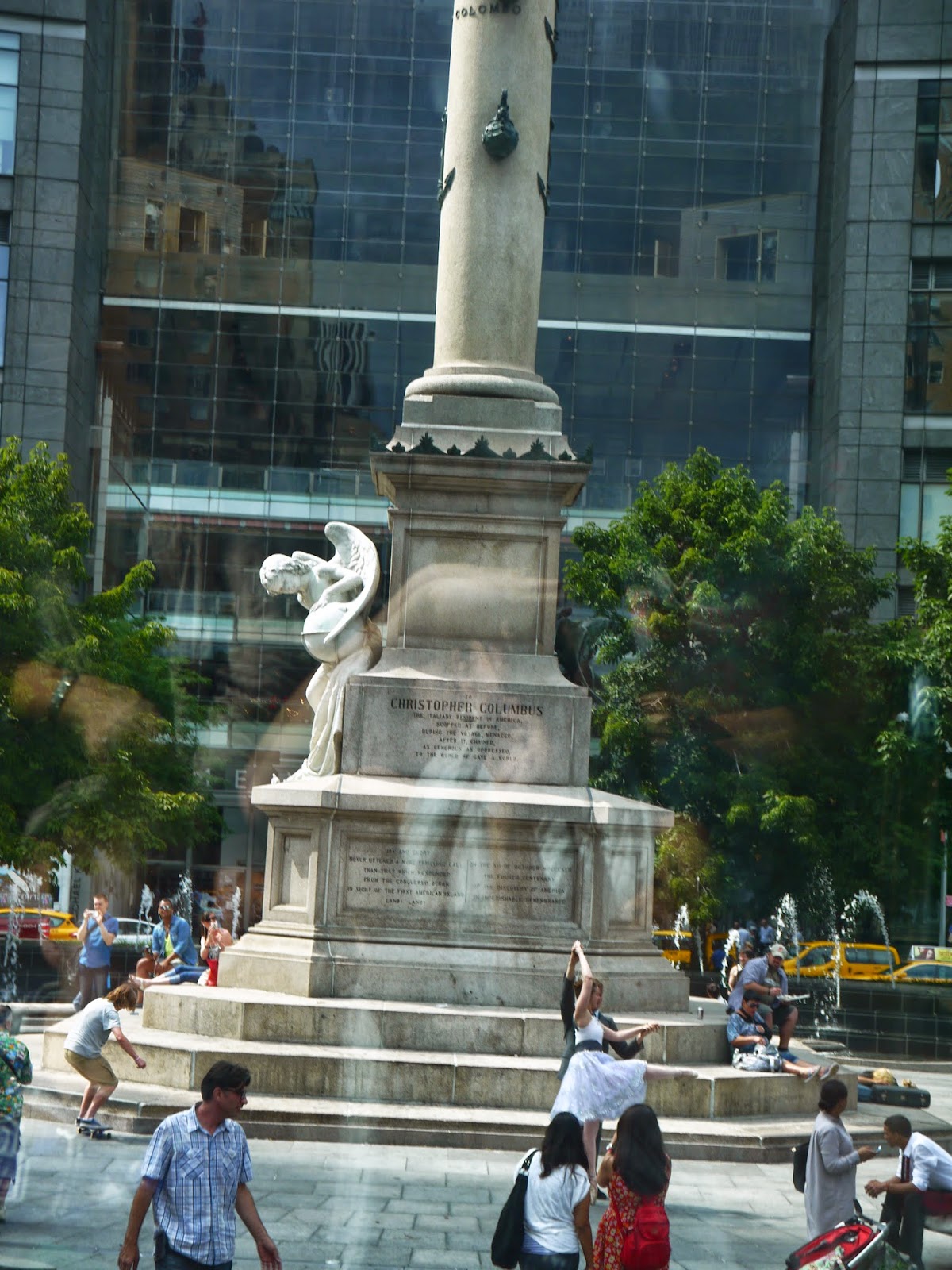 I thought it gave the tour information a fun flip side that filled not only my theatrical creative side but I also learned things throughout The Ride.

What we loved: Facts, Theatrical surprises & interacting with outside city folk. The Ride was clean, well organized and the box office was extremely helpful!
What could be improved: Nothing, if you havefollowed my blog a while I rarely give out no criticism because I think everyone can learn from one another. This was the first time I have none. We enjoyed our time with Scott & Jackie and hope to see them again this Halloween for the Haunted Ride!
Tickets & Coupon discounts can be found HERE.

Our overall Rating: We unanimously give it