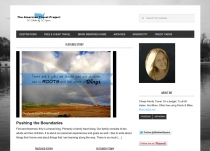 The Ride New York - Funny with Surprises along the way!

We are fortunate enough to live relatively close to one of the greatest cities on the planet. I have been visiting New York City since I was a kid myself, and now it is my kids’ favorite place to go for a fun family weekend. We have done lots of the expected New York City activities and attractions, yet there is still so much left to do. I haven’t (yet) written about even a fraction of our NYC experiences, although I have had a long post in the works for a while now. On a recent trip to NYC, we decided to try out THE RIDE for the first time.

Here’s some information about THE RIDE from their website:

THE RIDE uses New York City and its renowned landmarks as the backdrop for a theatrical event that blurs the boundary between tour and performance. The city becomes a stage, and soon you can’t tell where the street ends and the show begins!

THE RIDE gives you a front-row seat to the streets of New York City in a multi-million dollar motor coach that comes equipped with state-of-the-art audio/visual technology, including 40 plasma screen TVs and over 3000 LED lights. Enjoy the performance from the comfort of one-of-a-kind stadium seating and huge panoramic windows.

While navigating a 4.2-mile midtown path, our performers and native New Yorkers alike become performers for THE RIDE, showing guests an entirely new side of New York City they can’t see anywhere else.

Whether you’re new to the city or a long-time native, you’ll find something to enjoy.

We really, really enjoyed our trip on THE RIDE. There are some surprises along the way, so I don’t want to give too much away. But I can say that this is not a typical NYC tour. It is actually more like entertainment, with some NYC trivia and facts thrown in.

There were 2 tour guides, who I think were probably aspiring (or maybe actual?) comedians. They were very entertaining and funny. My kids were smiling ear to ear the whole time, especially my very outgoing daughter, who became a big part of the show by singing karaoke and answering every question they asked.

The seats are more like movie theater seats (in rows), facing the long part of the bus (instead of the typical bus set-up facing forward). The bus is all windows, so you do get some great views that are hard to come by otherwise. We also drove right by Pee Wee Herman filming something, and had a great view of him. Not sure that was a bonus though. The comedians poked lots of fun at people walking on the streets of NYC, so if you ever see one of these buses driving by, try not to do anything stupid (or, on second thought, do something really weird & become part of the show for the passengers).

I would definitely recommend THE RIDE if you are looking for a fun, entertaining, and different kind of experience in New York City!